Continue your debugging session, even after installing an updated version of the app you're working with. New Android debugger settings allow you to control whether or not apps start up automatically after installation. A more specific setting indicates you want only apps that were previously running to be opened automatically. These features extend GapDebug's Instant Debugging capabilities by making your debugging workflow smoother. 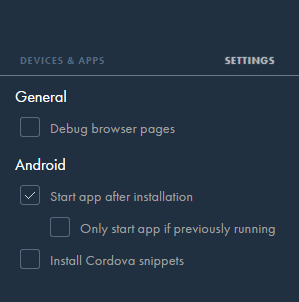 This same automatic app startup will be coming soon for iOS.

To prevent conflicts with the common 8080 port assignment, the default-system assigned port for operating the device connector has changed to 8088. You can always customize this setting in the debugger settings.

Finally, if you experienced any issues installing an update to an existing Android app, we found this was caused by a locked tmp file. We got that nailed down and fixed.