CodeTogether 4.0 is here with so many new major features it had to get a major version number!

Check out this video and then read on for details.

If you’ve missed the ability to pull up call/type hierarchies, usages, or the quick outline in participant sessions, you have reason to cheer as this release brings these capabilities to all client IDEs, and to browser sessions as well.

Access these features using your IDE’s normal key bindings or menu actions, just as you would if you were coding locally.

Joining a CodeTogether session using an invite URL is already pretty straightforward, so how did we just make this even better? Enter CodeTogether Teams!

CodeTogether Teams includes a 30 day free trial. It’s simple to add a team and try it out. 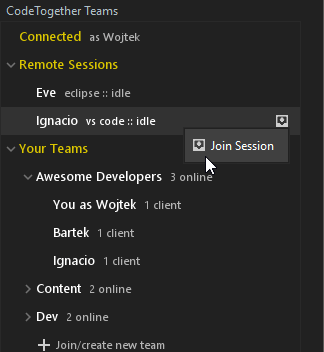 As promised, participants can now type and execute commands in shared terminals with CodeTogether Teams. We understand how powerful this capability is, so this is a team-only feature where a participant can request access only if they’ve signed in to the same team as the host. The host must explicitly allow write access for each participant who requests it. Of course, the terminal can be unshared at any time.

SSO integration is currently available only for on-premises installations. If your SSO provider supports the OpenID Connect protocol for sign on, you can set up your on-premises installation to allow CodeTogether access to users only if they’ve been authorized by your provider. The OIDC protocol ensures CodeTogether can work with providers like Okta, Azure AD, Microsoft AD FS and Auth0 among others.

Interested in on-premises? We offer a free 45 day trial so you can see if it’s right for your team.

A number of content assist glitches in Eclipse participants were fixed:

In VS Code, when editing Java, template proposals would sometimes not overwrite matched text.

In Eclipse, hyperlink navigation links would sometimes be hard to activate.

In IntelliJ, the go to definition action would not take you to the name of the targeted element, but to the beginning of the line on which the element was defined instead.

After inserting a proposal with no parameters, the cursor would jump to the location at which the content assist was invoked.

Participants will now see warning markers as well as errors, and quick fixes for warnings will be available too. To head off potential performance issues, we are limiting the number of warnings to 250 per file.

We’ve added syntax coloring for Scala and Dart. Java .class files (if source attached) will be colored as well.

With Eclipse and IntelliJ hosts, clients would often see an incomplete list of quick fix suggestions – this is now fixed.

This has been an exciting release with lots of new features, but there’s still more coming! Here’s what you can look forward to:

Have a feature you’d like to see implemented in the near future? Consider creating an issue, or voting for an existing one to increase its priority.

As always, thank you for the support and feedback, send us a shout on Twitter, or if you’d like to catch our team live, drop in on our CodeTogether Gitter community. If you like working with CodeTogether, please do us a favor and tell your friends and colleagues about us – thank you!