Build Pipelines and Validation in CodeMix

CodeMix utilizes build pipelines, defined via CodeMix augmented tasks, to produce a single authoritative build of your project. With build pipelines, you can utilize external tools for building and validation, and see the results directly in your editor. By using the same tools you would normally use to build your application for deployment, you are guaranteed to have a consistent development experience in the IDE.

The CodeMix plugin is compatible with Eclipse-based IDEs and tools—like MyEclipse, Spring Tools Suite, and JBoss Tools—so you can continue working in the environment you are accustomed to.

Build pipelines are defined via CodeMix augmented tasks, and can be used by CodeMix to produce a single authoritative build of your project. Pipelines allow you to utilize external tools for building and validation, and see the results directly in your editor. By using the same tools you would normally use to build your application for deployment, you are guaranteed to have a consistent development experience in the IDE.

Building and Validating Your Project

To validate your project, simply click the Validate button in the editor toolbar, or select Project > Build Now with CodeMix.

On clicking validate, if a build task is defined in your tasks.json file, you get the option to run this build task. In Angular, you can also choose to run ng lint on project. 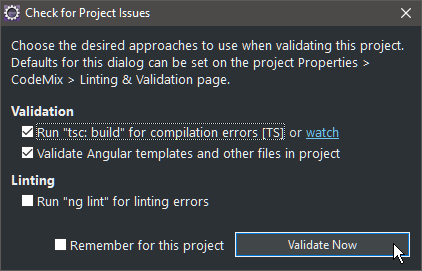 Errors and warnings reported by the task are parsed, and reported in the IDE in your editors and Problems/Markers view. In addition to running the build task, you also get the option to use CodeMix internal tech to validate all supported file types in the project.

Linting support for other frameworks and technologies will be added to future releases.

As opposed to build tasks which run and terminate, watch tasks continuously monitor your project for errors, until explicitly terminated. If a watch task is defined for your project, click the watch link in the Check for Project Issues dialog shown above or select Project > Start Watching with CodeMix to initiate watching.

Icon in editor toolbar indicating a watch task is running

To stop a running watch task, select Project > Stop Watching with CodeMix, or terminate the task in the Terminal+ view. In an Angular project, you can start and stop watching from the control panel. 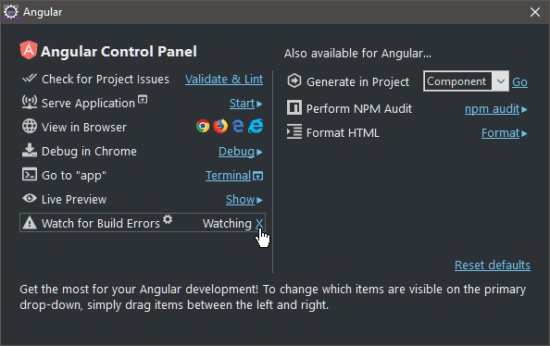 Use the Project Properties > CodeMix > Linting and Validation page to specify defaults for the validation dialog. 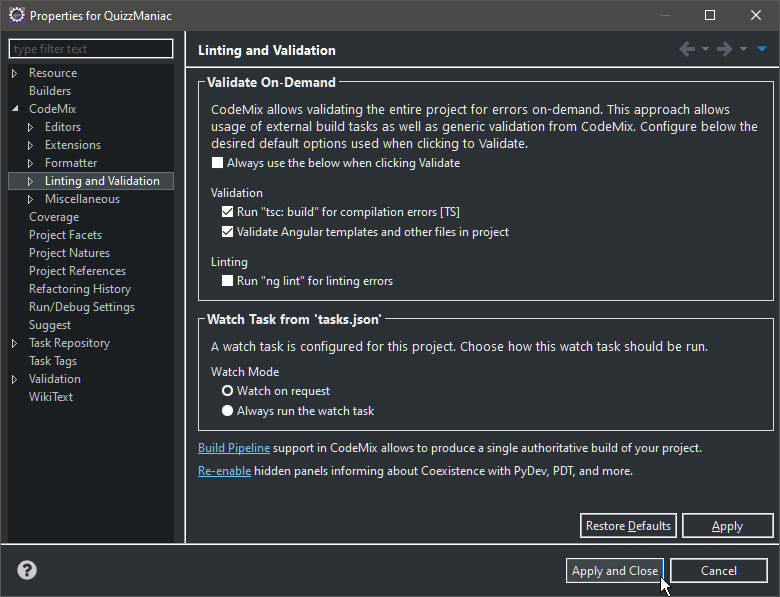 If you check the “Always use the below when clicking Validate” box, the build/validation process will run directly without having the confirmation dialog display.

If a watch task is defined for your project, you can also specify here, whether the project is to be watched automatically, as soon as your IDE starts, or on demand, by clicking the button/actions as described above.

Observe the properties under the codemix node:

For more detail, refer to Tasks in CodeMix with tasks.json.

For Angular and TypeScript projects, CodeMix simplifies build pipelines by automatically creating a template tasks.json file when creating a new project, importing an existing project, or upgrading from an earlier version of Webclipse or Angular IDE.

Advanced tip: The tasks.json file is located at <project_root>/.vscode. If your project already had a tasks.json file before it was accessed with CodeMix 2.0 or later, CodeMix will not automatically add build pipeline integration. You create a tasks.json file manually by following the steps in Appendix A.