1. Maven Support for Dependencies Only

Apache Maven is a software project management and comprehension tool. Based on the concept of a project object model (POM), Maven can manage a project’s dependencies, builds, reporting, and documentation from a central piece of information. Maven dependency management is one of the best-known Maven features and is one of the areas where Maven excels. However, exploiting only this feature is typically not possible. You would need to go almost all the way with a Maven-based project configuration, adding and configuring Maven plugins, dealing with profiles, and goals. While MyEclipse fully supports advanced Maven development with all these features, if you only want dependency management, creating a full Maven project creates unnecessary project complexity. This is where the Dependencies Only mode comes in. Beginning in version 2015 CI 7, MyEclipse supports the use of Maven’s dependency resolution without requiring you to use full Maven build management. 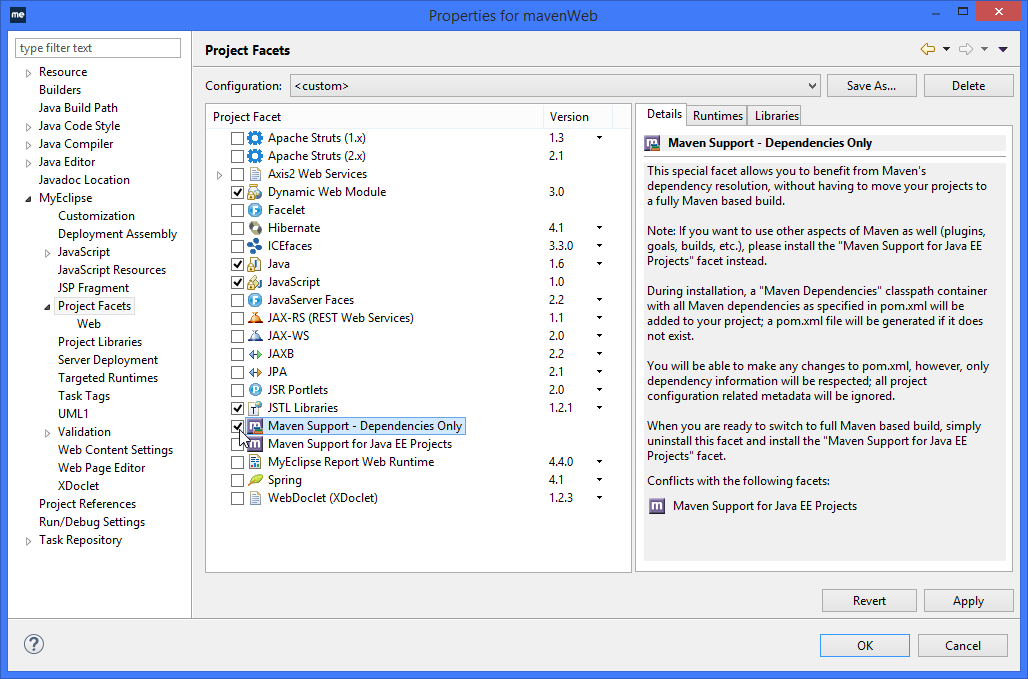 The sections below provide steps for several scenarios using the Maven Dependencies Only facet.

3.1 Adding the Dependencies Only Mode to a New Project

3.2 Converting an Existing Maven Project to Use the Dependencies Only Mode

MyEclipse 10.x and lower versions had incomplete Maven support that primarily dealt with dependencies only. If your project does not have a correctly configured pom.xml file, when your project is migrated into MyEclipse 2013 or later, you could experience issues during deployment.  Please reset your project to the state it was before migrating to MyEclipse 2015 and then perform the following steps to correctly migrate it.Deployment should now be similar to deployment in MyEclipse 10.x. Note: This process will continue to be streamlined in future MyEclipse releases. When you are ready to switch to full Maven based configuration, simply uninstall this facet and install the Maven Support for Java EE Projects facet.