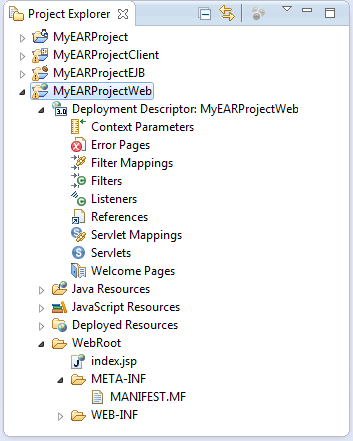 It is now possible to create Java EE enterprise applications thanks to project models and management tools.  Here you will learn about:

icon, is a logical container of Web, Application Client, Connector, and EJB projects, which results in a single, server-side deployment unit known as a Java EE Enterprise Archive (EAR). No subprojects are physically located within an EAR project’s folder structure, but rather the EAR project maintains references to its component modules.

The Java EE Specification defines the runtime structure of an enterprise application as a collection of Java EE modules and basic file resources required by the modules.

The most common types of Java EE modules are:

Typically a web module provides web user-interface services and user access to the business services provided by one or more EJB modules. The Java EE specification defines the EAR as THE standard Java EE deployment unit. Additionally, the Specification allows for, but does not require, application server vendors to support other deployment forms such as stand-alone WAR and EJB JARs.

Note: For Java EE versions requiring the application.xml file, do not move or rename this file or the META-INF folder. Doing so results in deployment failures. All resources other than the project’s meta-data files are considered part of the deployment. 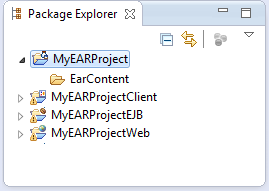 The Java EE Specification defines a hierarchical Java class resolution strategy for enterprise applications. This bottom-up search strategy is depicted in in the illustration below. When any module references a Java class, its local classloader first searches that module’s code base for the class. If the class is not found local to the module, then the module makes a search request to the classloader at the next level above it. This process continues until either the class is found or the top-level Java boot classloader is reached (not shown in the illustration).

It’s important to understand the Java EE enterprise application classloader strategy: The classloading strategy affects how you choose to distribute classes between web and EJB module projects. For example, if you have one or more business data objects that are passed between the user-interface elements of a web module and the services of an EJB module, by locating the data objects in the EJB module, they become visible to both the web module and the EJB module.

Two common project organization mistakes that cause classloading problems are:

Note: The MyEclipse development team felt it was a paramount requirement that the classloader emulation be supported to help developers identify hard to resolve runtime errors caused by classloader visibility problems. This is one of the reasons why MyEclipse does not support physical embedding of module code within an EAR project. Instead, an EAR project maintains associations to individual web and EJB projects as modules.