In the coding world, collaboration has been taking place in the form of coding parties, retreats or hackathons, and, more recently, through new technologies that allow for virtual exchanges. Many might argue long and hard, giving preference to one over the other, but what’s the deal behind each one?

The word “party” normally conjures up an array of images in our minds. Now, a coding party is a special type of creature! These normally happen during college or even at companies, but tend to be much less fun than their regular counterparts. In the words of one of our co-founders, Wayne Parrott, “My first introduction to coding parties, which predate hackathons, was a forced overtime effort over the weekend – basically a false representation of extra work.” They normally end up being a failed attempt to make a sacrificed weekend look like fun.

For college students, there’s a bit of ambivalence, as explained by Aaron Lara, one of our engineers. On the one hand, there’s learning involved because, “There’s that ‘out-of-the-box’ help – somebody who is not deep in your code can see things you don’t see.” On the other hand, there’s a danger of not being able to focus on your task because of trying to help others. And, it’s so easy to turn to just drinking, regular party-style!

Retreating into your code 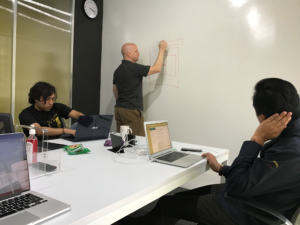 A coding retreat, on the contrary, is a very positive learning experience (even in unexpected ways). As explained by Todd Williams, another of our co-founders, interacting with other developers to continue perfecting coding practices is a very healthy thing to do. “Most development is like a local echo chamber – engineers get used to what is acceptable in their group, which can result in some crazy practices. All it takes is someone taking a half a step in the wrong direction which never gets corrected, and it snowballs from there.” Back in his consulting days, he often had to spend months rehabbing entire teams and excising ridiculous local practices! Therefore, getting together with fellow programmers is not such a looney idea (despite a stereotypical loner image).

Making your code run the 10k or more 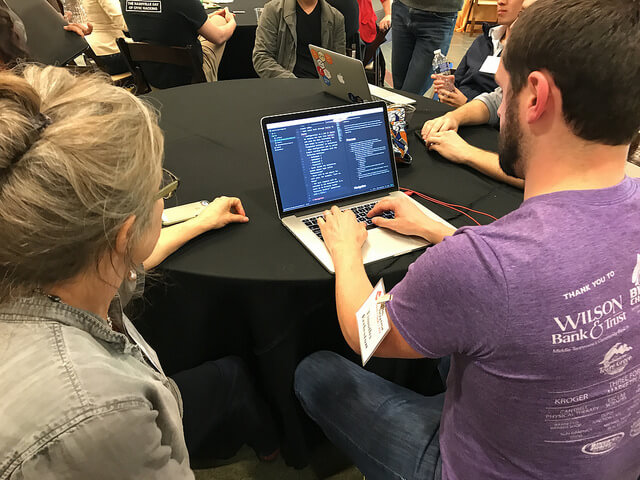 A hackathon, which can form part of a coding retreat, is normally a multi-day event where small coding teams with a common interest rapidly build their favorite feature or app. These tend to be beneficial for both participants and corporate hosts such as recruiters. For the former, there is learning and even prize money to gain, while for the latter it’s a chance to find potential talent or discover a killer new feature for the host company’s platform. A range of companies organize them, and there is even a site which helps form hackathon teams. There is always a hackathon to look forward to like this one in Austin coming up in November. But even with these, it’s not all peaches and cream: some actually call them a waste of time (only vaporware – software that never gets used –  is produced).

If none of these collaboration scenarios seem appealing, there’s light at the end of the tunnel: it will soon be possible to work with others without having to be locked up in a room, or on a bus, or even in the best of cases, on an exotic island. CodeTogether takes collaborative programming to a whole other level, giving you a highly capable, real-time experience, without the need to leave your desk, or even, your favorite IDE or editor! This amazing tool for virtual collaboration is already in private beta and will be revolutionizing the entire coding universe. Don’t miss out on this game-changer, click here to sign up.