Did you miss the MyEclipse 2018.12 release around the holidays? Besides the usual complement of bug fixes, we’ve been able to fix some long standing performance issues, and make some fixes for Java 10 as well. If you’re using MyEclipse 2018, this is a release you’ll want to pick up.

Slow JSP Typing – you’re too fast for the IDE (NOT)

It feels great to be able to nail a performance issue, especially a severe problem that might have existed in the product for several years. To put things in perspective, a very specific set of conditions needed to be met for the issue to manifest itself, but when it did, the JSP editor was nearly unusable. Have a look at the GIF below for an actual comparison of what happens before and after the fix, when typing at the same speed – if it isn’t already obvious, before the fix, the view would update several seconds after the character had been typed.

We noticed that a number of views were being updated even when not in use, sometimes driving the IDE to a “Not Responding” state. While not really the source of this problem, users would often see a “Resetting Selection” job appear to be running all this time. This behavior has now been corrected and you should have a more performant experience overall. 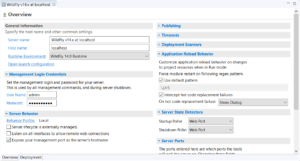 We’ve closed off 2018 with this release but are working on continuous improvements. Up next – Java 11 support, and an upgrade to the latest version of Eclipse, among other features and fixes.

What would you like to see in MyEclipse 2019? Let us know via Twitter or through the MyEclipse forum. Looking forward to bringing you more enhanced programming experiences!