Tim Webb
Vice President of Operations and a passionate technologist who thrives on merging software and marketing. Follow @timrwebb for periodic musing. A developer by birth, an optimizer by necessity, a forever believer in the ability of software to improve what you do.
Posted on Mar 7th 2017

TL;DR Hit the market need, engage with users, and a lot of blood + sweat. 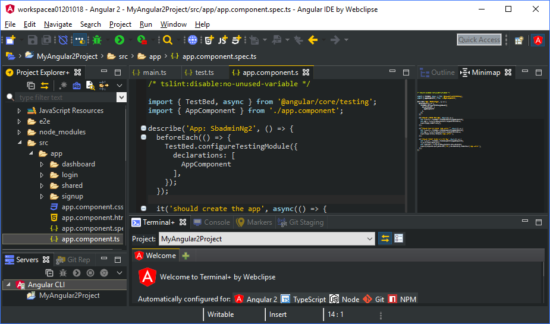 In short, we were tired of Eclipse looking stagnant. While other “cool” IDEs and Editors have built up their markets, Eclipse has looked about the same for the last decade. Many love that stability, but many others are ready for change. At Genuitec, we are a small company competing to succeed commercially with plugins like Webclipse and products like MyEclipse and we’ve done a pretty good job so far – 14 years after we first shipped MyEclipse. That said, our users were beginning to leave the Eclipse IDE simply for something fresh. So our choice was to either watch them go or try to make Eclipse exciting again and remove one reason that a developer might jump ship to an editor like Visual Studio Code or shell out big cash for a JetBrains product. And so began our start, six months ago, into making Darkest Dark.

In 30 days since its release, we’ve managed to make Darkest Dark into the 4th most popular plugin in the Eclipse marketplace! Imagine going from zero to 25,000 installations, from no one knowing you existed to over 4% of plugin installs (and growing) in one month! To say we are excited is an understatement but getting there has been a big leap of faith.

Let’s break down the technology behind Darkest Dark into 3 main components:

The No Brainer – A pleasant color scheme. This is the obvious one, making Eclipse look decent and less washed out when compared to the regular Eclipse Dark theme. Easy peasy lemon squeezy – just slap some nice E4 CSS together and call it done (almost).

The Head Scratcher – Making a dark theme for Eclipse actually work. Anyone who has tried the Eclipse Dark theme knows just how many things don’t play nice with the E4 CSS. Plugins abound that have hard coded colors, lack Dark theme contributions, don’t play nice with the CSS, or look horrible with those Windows scrollbars. (There is a reason other themes for Eclipse tend to show screenshots on Linux, not Windows.)

The Gamble – Changing out the icons! In many ways, the icons are what you first notice about Eclipse. Those same tired looking icons from the mid 2000s are still there, yes, some are updated for retina and actually PNGs instead of GIFs but the vast majority are unchanged. I decided we could do better and so began our quest to find a creative way to enable Darkest Dark to swap out icons at runtime while providing a way for our users to contribute. And of course, we had to ensure that the icons looked modern, flat and really good on dark: 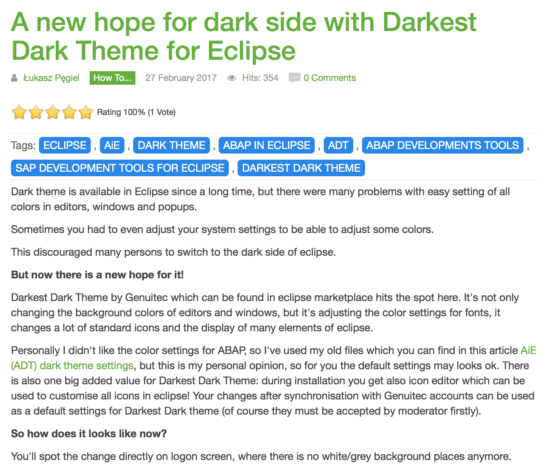 Overwhelming! Yes, the icons are different and that may not be for everyone. And yes, it is truly a dark experience. But users so far seem to love it. We’ll continue to improve and do our best to eradicate any last issues but we are thrilled that our months of blood and sweat that went into making Darkest Dark have been so well received. I was personally involved in intercepting the icons to make the technology work and I must admit that many thought I was nutty for investing time in something so “cosmetic!” Yet there was faith here at Genuitec, and a bit of stubbornness, that doing something so different would be well received. Let’s be honest – if you are tired of something, you want more than just slapping a few new colors on your IDE. Fingers crossed we can keep up with the interest and issues but we are thrilled with the feedback and look to stay on top of requests! Now, how can we get to #1 in installs?

Building technology is awesome – everyone who has spent time making software loves the joy of seeing the software run! However, the “build it and they will come” mantra doesn’t send us on the path to #1 in the marketplace. We’ve built Darkest Dark for community collaboration by including the first iteration of our Icon Designer so our users could participate. Our first major drop of community icons came from Lukasz over at abapblog.com who contributed a whopping 472 icons in his first week with the Icon Designer. Of course, rolling out Darkest Dark was bound to have technical challenges and that’s where twitter has been superb. We’ve been actively helping users within hours of reports to get fixes into hotfix builds shortly after – closing the gap from a really good theme to near perfect from week to week.

And this is just the beginning…

We’re just one month into the Darkest Dark rollout and already users have had some superb ideas, suggesting everything from letting users create icon sets (thanks bitbrain!) to the inclusion of alternate color palettes. We are thrilled with the pickup so far and have an internal pool to see who can get closest to the right date for when Darkest Dark hits #1 on the marketplace leader board.

Want to enter our pool? Hit me up @timrwebb with #DarkestDark or @Genuitec with your prediction!