Update:  Since this blog was first published, Genuitec has released an Angular IDE with advanced support for both TypeScript and Angular 2.

Angular is a JavaScript framework used to create and maintain single-page web applications. It all began in 2009 when Misko Hevery was working on the Google Feedback project. He found it daunting to maintain 17,000 lines of code, and suggested to use his Angular framework (created with Adam Abrons). The result was 1,500 lines of code—10 time less!!

In May 2014, the Angular team announced they were working on Angular 2. Improvements included:

The web evolved so much in the years since Angular’s inception, this new version was necessary to make the framework modern again. However, to include all these features, they needed to start from scratch. This requires a whole new learning process for the Angular developer, something many developers don’t like.

This article focuses on Angular 2 (now available as a release candidate). While many developers are impatiently waiting for the final version, others don’t want to know about Angular at all. Read this article to learn more, and then pick your side.

There are three main improvements with Angular 2.

Now that you are more familiar with Angular, I’m going to explain the main building blocks of an Angular app architecture. Attached to this article you can find an application of a simple todo list performed in Angular 2 with TypeScript. 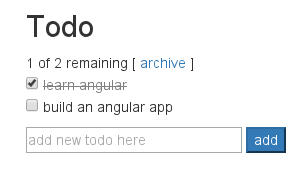 You can follow along in the project as the code is explained below.

An application in Angular is generally organized in a modular structure. A typical module is a block of code dedicated to a single purpose. Modules are optional, but highly recommended to structure and organize code. In general, a module exports a component class, this is one of the basic Angular blocks, a component class is a thing we export from a module.

Most applications have an AppComponent. By convention, I named mine app.component.ts. Inside this file is an export sentence that tells TypeScript that this is a module whose AppComponent class is public and is accessible from other modules in the application.

In the next example, we have a class named TodoAppComponent in the file named todo_app.component.ts.

To reference TodoAppComponent, import the class as follows.

The import sentence tells the system that it can get TodoAppComponent from a module named todo_app.component located in a specific directory.

Import modules from the Angular Library in a similar way, except you don’t need to specify a path, only the bare module name.

In brief, we can say that Angular applications are composed of modules that export things that other modules import. It is best practice to write our applications as a modules collection each one exporting something.

A component controls a patch of the real state screen, usually called a view. In our example, the layout of root application with links, the tasks list, and the form to add a new task are all views controlled by components. Angular creates, updates and destroys components as the user moves through the application and the developer can take action at each moment in this lifecycle through optional lifecycle hooks.

Below, we can see the code of the component that controls the view of new tasks form.

Here an event is emitted with the input value captured from the form to be inserted in the todo list.

The view of a component is defined with its respective template. A template is a block of HTML code that tells Angular how to render the component. At first sight it seems just basic HTML, but gets interesting once you notice the special Angular code and tags. Below we can see the template of the component class form previously shown.

Notice not only the familiar labels <form> and <input>, but also unfamiliar items like (ngSubmit) and [(ngModel)]. In this example you can see how you can comfortably mix Angular labels and HTML without a problem.

The metadata tells Angular how to process a class. We include metadata in the TodoFormComponent class to tell Angular that this is a component. 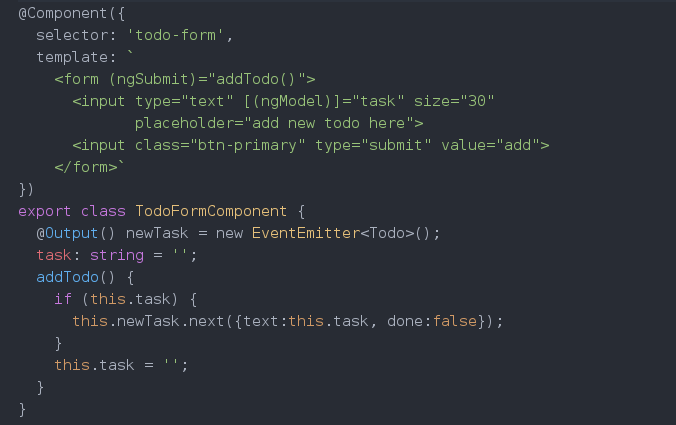 @Component tells Angular that the class immediately below is a component class. This decorator takes a configuration object with the information necessary so Angular can create the component and the view.

Some possible settings are:

The @component function transforms the configuration object in metadata to bind it to the component class definition. The component, template and metadata describe together the view.

If we don’t use a framework, we have to keep the variables up to date with the fields in our form (or vice versa). This can be a tedious task in which errors can be easily made and detecting them can be very difficult. If you have used jQuery before, you can understand this issue. 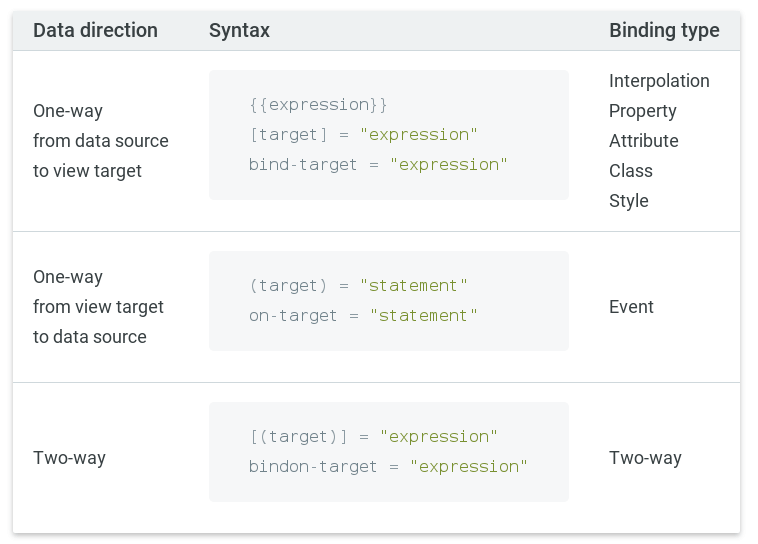 In our example todo list app, we include the four kinds of syntax in different parts of the code. In the following example, you can see four lines of code that demonstrate each of the forms.

In the first line, as part of the class name and inside the label <span>, the interpolation shows the component property values todo.done and todo.text respectively. In this case the direction is from the component to the DOM.

A directive is a class with directive metadata. In TypeScript we used the @directive decorator to attach metadata to class. We have already known a directive class that is the component. There are two other types: structural and attribute directives. Most of the time these appear inside element tags as attributes, sometimes by its name, but regularly as the target of an assignment or a binding.

Structural directives modify the DOM by adding, removing or replacing elements. For example to show in the view the list of created tasks, we use *ngFor to tell Angular to show each todo contained in the todo list.

The attribute directives alter the look or behavior of an existing element, and are named such because they look like regular HTML. For example, see the ngModel directive in following code.

A typical service is a class with a well-defined purpose to do specific things. Although Angular does not specifically have classes that define a service as a ServiceBase class, these are fundamental in any Angular application.

The Angular components are heavy consumers of services and depend on them to manage most tasks. The components don’t validate data that the user introduces or consult data from the server, they delegate these tasks to services that are usually generated from the server side. The services are available to components through dependency injection.

Dependency injection is a way to supply a new instance of a class with dependencies it requires. Angular uses dependency injection to provide a new component with the services it needs. When Angular creates a component, the first thing it does is examine the types of the constructor parameters to know what services the component needs. When a service instance is unavailable in the container, the injector can create the instance and add it to the container before returning the service to Angular.

Previously we must have registered a provider with the Injector. A provider is something that can create or return a service, typically the service class itself.

We are interested in your opinion. Do you see the value in Angular 2? Want us to write more about it? If you have any comments or questions, we would love to hear from you @Webclipse on twitter or via the Webclipse forum.

If you haven’t already subscribed to our blog posts, why not take a moment to subscribe to receive notification of future posts?