Todd Williams
VP of Technology and Co-founder. Decades of scars from software development and the business surrounding it. Follow @toddewilliams for musings.
Posted on Jul 11th 2016

How Can I Debug Inside the Docker Container?

Now that we can run SpringShoppingCartExample in the Docker container, we can easily debug it. All we need to do is update our Docker container so Tomcat debugging is enabled and then connect to it with the MyEclipse debugger.

Our Dockerfile defines a Docker image that creates a container that runs Tomcat in production mode. So to enable Tomcat debugging we need to modify the image definition to do the following:

If you recall, the initial Dockerfile only contained the first line. You might be wondering why we didn’t need to expose port 8080 or include a run command in the original file. That’s simply because those two things are already done in the base Dockerfile that defines the default Tomcat 7 image we’re using. For the curious, you can see what’s in that Dockerfile here.

Now that we have the image definition we want in the Dockerfile we need to build and tag a new image that we can use for debugging Tomcat instead of just running it. We’ll do that by running the following docker build command in the Terminal view. You’ll note it’s almost identical to the one we ran in Part 1 of this blog except that we’re now tagging the resulting image as “debug”.

We can then verify that our image was really built by running the docker images command:

When we launch our debuggable Tomcat 7 Docker Container we need a way to tell MyEclipse that an external server is running since MyEclipse isn’t directly controlling the container lifecycle. This is done by setting up a new Debug Configuration by using the following steps:

Once that’s done, click Close and confirm that we want to save the configuration as there’s no need to launch it in debug mode right now.

Putting It All Together to Debug SpringShoppingCartExample

Now that we’ve built a debug image for our Docker container, our application is deployed to a convenient disk location and we’ve created a debug configuration in MyEclipse, we’re ready to put it all together and do some actual debugging.

To begin, we need to launch a Tomcat 7 Docker container based on our debug image definition. Note that the command we’re using is a little different from the one we used in the run configuration.  In this command we’re specifying myeclipse/examples:debug as the container image and adding another -p option to map the JDPA debug port (8000) on our container to the same port on the Docker virtual machine (to see it, just hover your mouse over the code below and then scroll to the right).

Since we’re debugging, let’s go ahead and set a breakpoint in ShoppingCart.java. I chose line 27 in the addItem method and it looks like this: 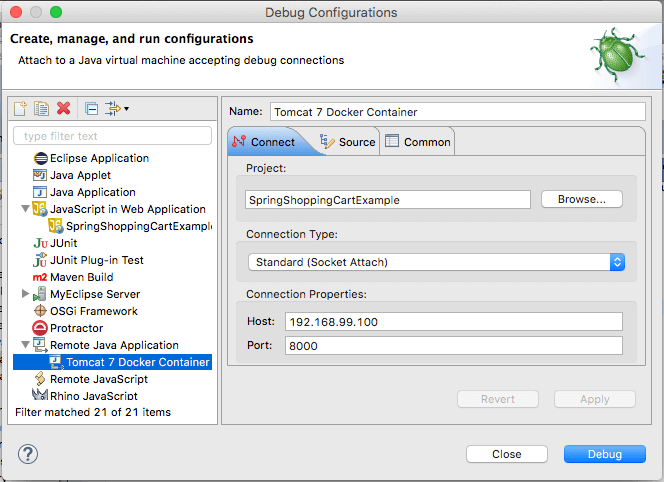 You will notice that when you click Debug nothing really happens. That’s a good thing as MyEclipse only reports if there’s an error during the connection process. So, no news is good news in this case.

Just like in the Run section of Part 1, we’re going to open the MyEclipse Web Browser and navigate to http://192.168.99.100:8080/SpringShoppingCartExample/. We’ll see that the debug version of our Tomcat 7 Docker container is indeed running SpringShoppingCartExample. To hit the breakpoint we set earlier, use the Click here link in the browser and on the next page click any of the add to cart links.

When the breakpoint is hit you may see a dialog that requires you to confirm a switch to the Debug Perspective. Once you do that, you should see something like this: 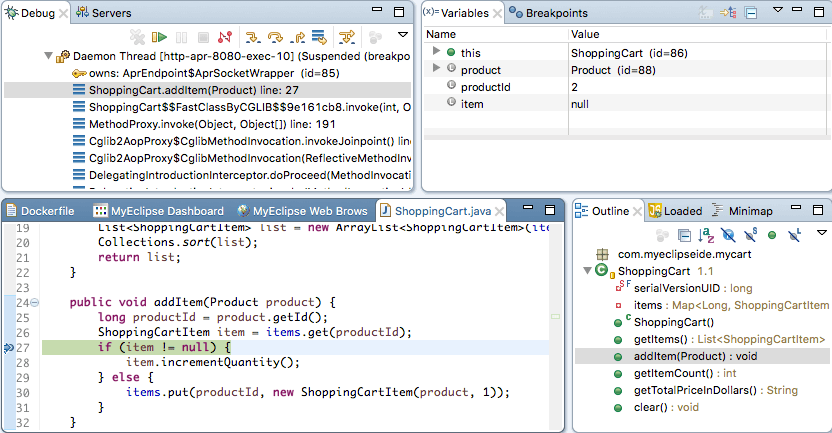 Of course you can do whatever you’d normally do when debugging, but when you’re doing inspecting the code just click the Play button in the Debug view toolbar to continue.

While we’ve got our container running, I’ll also point out that other cool development features in MyEclipse like LivePreview also work for our deployed application. To test this out, open pagetemplate.jsp in the MyEclipse JSP Editor and arrange the editor area into a horizontal split layout so you can see the web browser at the top and the JSP editor below it. If you did it correctly it will look like this: 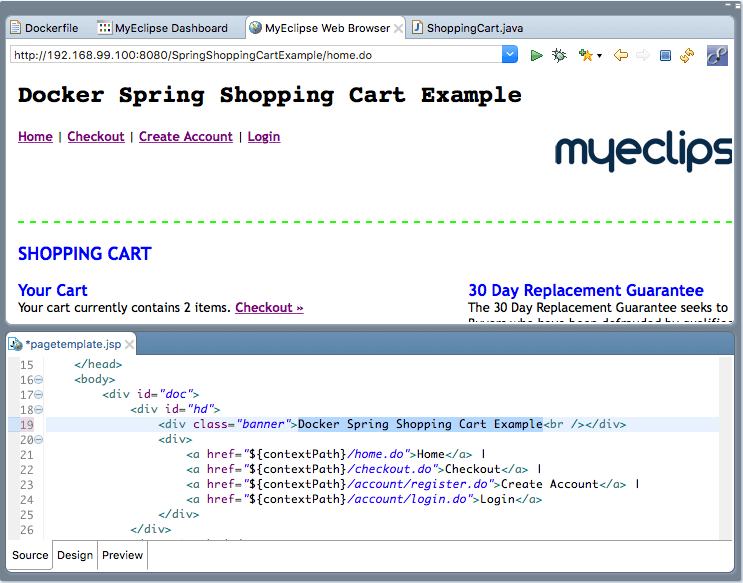 Yep, we’re all done. But before we wander off, let’s go ahead and shut down our Docker container so we don’t forget about it. While we could do this like we did before, by using docker ps and then docker stop, below is a bit of command line magic that will simply stop any docker container that is currently running, which is much simpler:

You may now embrace your “mad dev skilz” in front of your co-workers to lead the way—if you truly feel the call to build a new awesome reality! If you have any questions or feedback, I’d love to hear from you. Hit us up on twitter at @MyEclipseIDE or on the MyEclipse forum. And, if you’re not already subscribing to our blogs, sign up today!