Some time ago an article Creating My First Web App with Angular 2 in Eclipse was published. Since then, Angular was upgraded and became Angular 4, and new tooling for it in Webclipse (now CodeMix) appeared. Let’s see how creating a simple application using Angular 4 and new Angular tooling looks.

Switch to Angular perspective using the button at the top-right corner of your IDE. 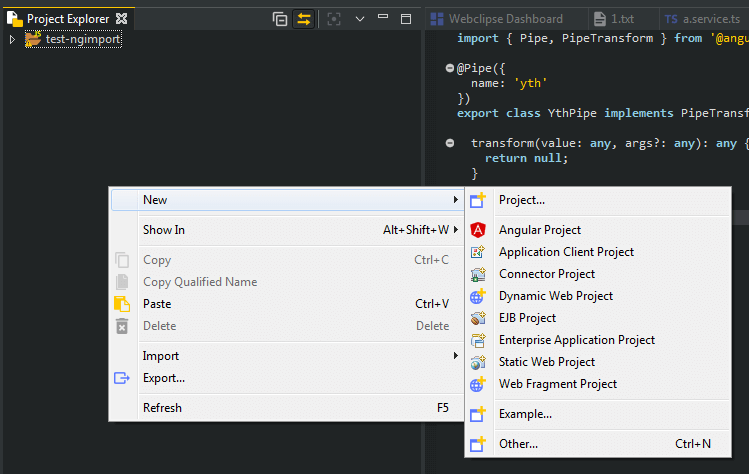 You’ll see the new Angular project wizard, where you can select Node.js, NPM and Angular CLI versions you want to use. For now, let’s enter project name “vehicles” and leave all versions default. 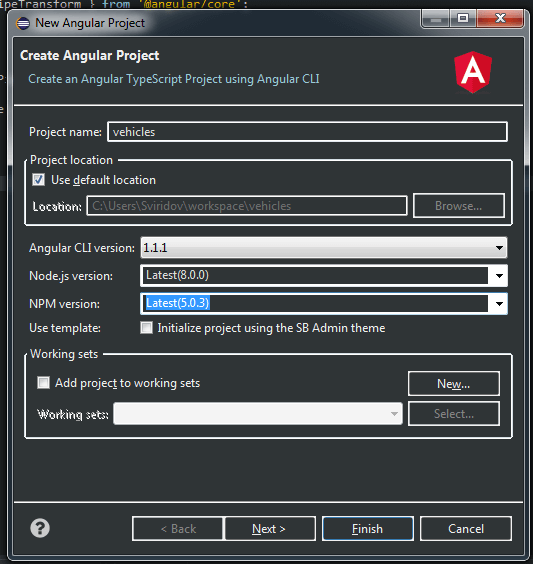 After that, you can either click “Finish” or “Next> “ and see a list of the commands which would be executed in local terminal to create your project.
In Terminal+ view you can see how commands are executed while creating your project. Also, Terminal+ is used while performing any Angular CLI commands – for creating new elements, starting server, etc. You can use it for entering your own commands as well. 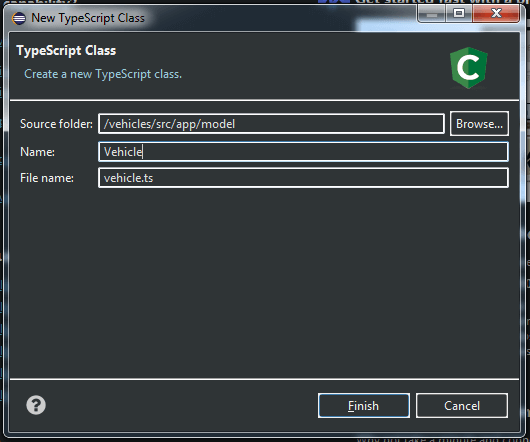 Make newly created Vehicle class to be the following: 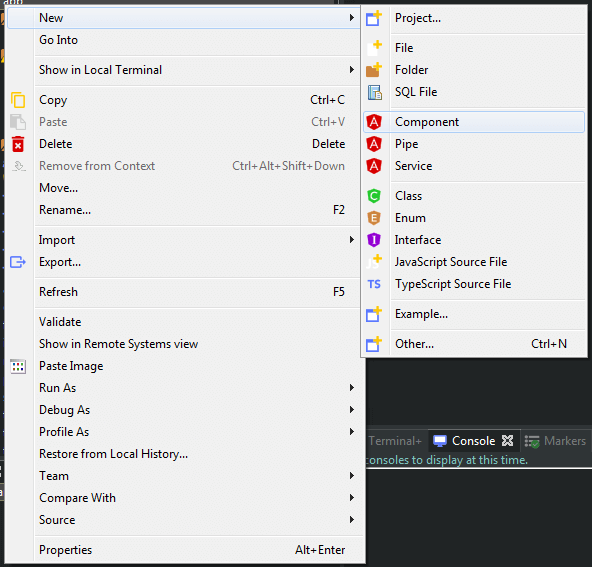 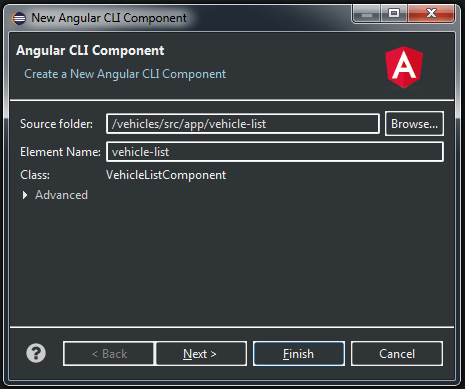 Vehicle-list.component.ts file would be opened. It contains basic component’s infrastructure looking like following:

OK, we’ll definitely need to store a list of our vehicles somewhere. Let’s add field vehicles: Vehicle[]; to the VehiclesListComponent class. Of course, Vehicle will be highlighted in red—currently, the TS compiler knows nothing about it. To fix this, just target your muse on Vehicle class name underlined with red, or put caret into it and click Ctrl+1. You’ll see the following quick fix suggestion:

Click onto the link with the given suggestion, import statement for Vehicle class would be added to the top of the file.

Well, now we have a vehicle list, but how can we interact with it? Passing it to the constructor would make our code less flexible by requiring a concrete list to be specified when creating a vehicle list component. There’s a better solution—Angular supports Dependency Injection out-of-the-box, and it can be accomplished using Angular Services.

Angular Service is used when some common functionality needs to be provided to several modules . For now we won’t implement any complex logic to obtain the list and will just hard code our vehicle entries. In the following code we import the Injectable decorator, set up our list, assign given list to class field and return it by demand:

Ok, we’re done with our initial UI. To see the result, just add our selector tag to app.component.html:

Then go to Servers view (or open it if necessary), select your newly created project and click “Start Server”

You can monitor the startup process in Terminal+ view. Also, CLI would dispatch changes to project files and rebuild app immediately after changes are saved – this process is also reflected in Terminal+.
Open your browser (it’s highly recommended to use Chrome) and type localhost:4200 in its address bar. Here we go, application works! 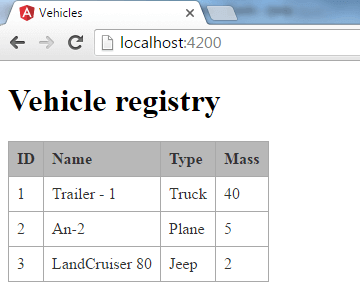 Our table is pretty, but not very interactive, huh? OK, let’s make it a bit more “dynamic” by adding a Details view that displays a clicked table row and allows the fields to be edited. Let’s create VehicleDetailsComponent – choose New > Component and enter “vehicle-details” as a name.

Just like for Vehicle List, a folder with ts and html/css files will be created. We’ll need to modify two of them. VehicleDetailsComponent in vehicle-details.component.ts needs to have a field for current vehicle—vehicle:Vehicle, with @Input directive above. This decorator declares the vehicle field as an input, which makes passing an actual value to it much easier.

If an error with text like “Can’t bind to ‘ngModel’ since it isn’t a known property of ‘input’” appears – then it means that app modules weren’t properly configured. Go to src/app/app.module.ts and add FormsModule to imports section, so finaly app.module.ts should look like following:

No compilation errors should happen after this. Warning could remain, but it doesn’t break down any functionality.

Also, in the html template we’ll need to add a tag for the details component. To make it work, we need to import VehicleDetailsComponent and add the corresponding directive. After given changes, vehicle-list.component.ts will look like the following:

Next, let’s change the vehicles list template, vehicle-list.component.html. We need to add the click handler to each table row to call the corresponding selection method—(click)=”onSelect(vehicle)“. Also, let’s add a tag for the vehicle details component below our table:

Your changes should be automatically picked up and compiled; please, look at Terminal+. If you haven’t closed your browser, you don’t need to do anything – the browser should be updated automatically. Switch to it and you’ll see: 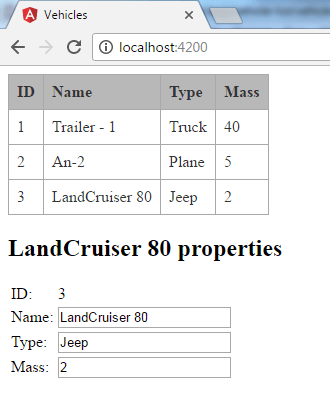 Perfect, it works. You can try editing any value under the “properties”, and the change will be immediately reflected in the table — nothing extra needed for it.

It looks pretty good now, but it’s a bit difficult to determine which row is selected. Let’s fix this. Add an attribute [class.selected]=”vehicle === selectedVehicle” to the <tr> tag in vehicle-list.component.html. Its meaning is pretty obvious—add a CSS class for the case when the current row’s vehicle equals the selected one. Of course, to make this work, we need to add corresponding style to vehicle-list.component.css: 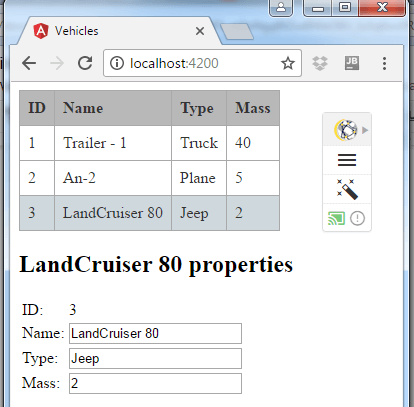 Great, our table looks much more interactive after this.

Possibly you’ve noticed that small vertical toolbar at the top right corner of the page in browser? It’s CodeLive toolbox, which can be very helpful for finding out what’s happening in your application and which components are being displayed. Let’s see how it works.

Click that wand icon – you’ll be able to see which component is under your cursor pointer. If you now click that grayed area – the component tree will be opened. 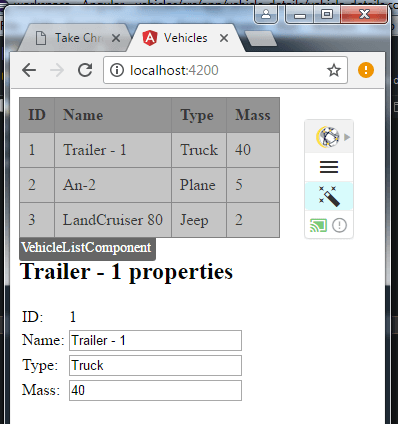 You can also see the component tree by clicking list icon, which is above the wand icon in CodeLive toolbox. 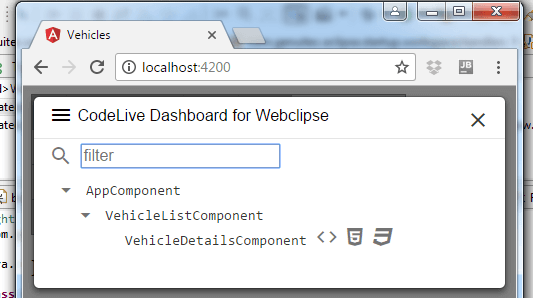 In our case a tree is pretty simple, but in case of real applications, which could consist of significant amount of components, such a tree with an ability to filter it could be very useful.
If you put your cursor near one of the items of this tree, you’ll see 3 actions allowing to open ts, html and css files for a given component. It could be very useful for those who want to investigate an application created by some other person.

Some guys who are switching from Desktop & Mobile development to Web one are complaining about poor debugging tools offered for Web developers – in the best case they need to debug in browser, and in the worst one – using old tricks like printing values to console or showing them in the pop-ups. Don’t worry – CodeMix tooling allows debugging in your favorite IDE.

Let’s put a breakpoint e.g. into onSelect handler of our VehicleListComponent. 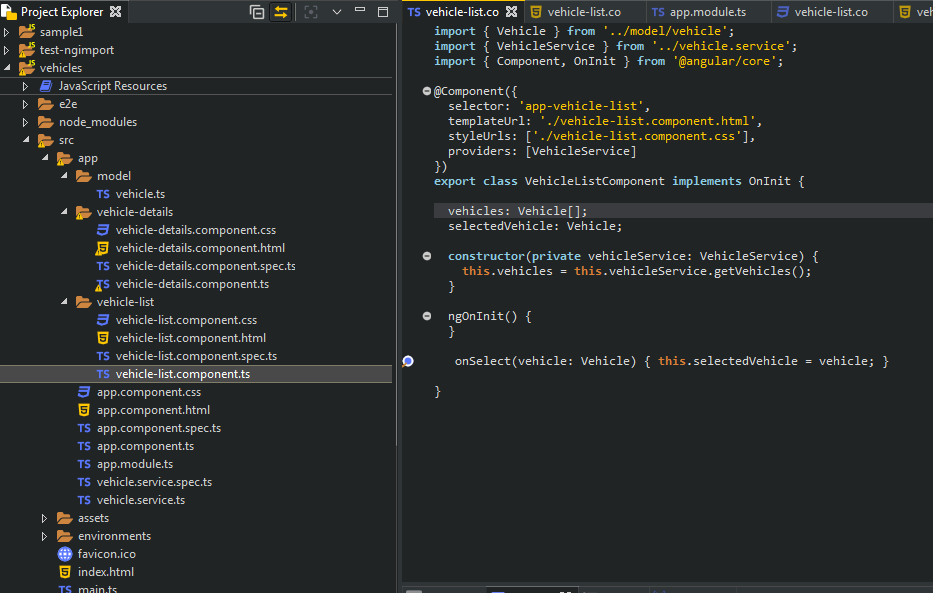 Then go down to Servers view and click on “Debug application in Chrome” icon.

Chrome would be re-launched. Click some entry in Vehicles list to select it. The IDE would suggest you to switch to Debug perspective, after this you’d see the stuff well-known for Desktop or Android app developers – debug line mark, debug stack trace and variables view:

In the “Loaded JavaScript view” to the right of the source editor area you can see js files, which are loaded by the app.

As I said in the previous article, Typescript and Angular are great tools to start Web development with – they allow to write code in Object-oriented style, without much headache with different browsers support, dynamic typing etc.
Using Webclipse Angular tooling makes this even more convenient and friendly – you can create projects or components using modern GUI (without a direct use of the command line), inspect your component model using convenient and intuitive tooling, and debug your application inside the IDE in a way well-known to almost any programmer. On the other hand, you don’t lose the flexibility of plain old command line – it’s still accessible for you in Terminal+ view, as well as an output of CLI commands called by wizards – IDE doesn’t try to hide any details from you.
In my opinion, the described set of tools is a  very good choice for anyone who wants to start his or her experience in Web development.