Bob at Genuitec
Virtual evangelist at large. The face of Genuitec often appearing in graphics. Pen-name for our more shy writers of content.
Posted on May 31st 2016

Recently I had to optimize a method that was bottlenecked in one of our applications. Among other things, the method I was optimizing created a file based on a String concatenation. This is a very common task that usually takes a couple of lines along with a try statement. However this time I was trying to optimize the run time. So as any person looking for answers to programming questions in this modern day, I turned to Google and it lead me to Stack Overflow, specifically to this thread: http://stackoverflow.com/questions/1677194/dumping-a-java-stringbuilder-to-file.

There are several answers regarding how to dump a StringBuilder to file on the thread and I didn’t know which one to trust. I decided to run some tests and make my choice based on the results.

My tests were very simple. For each algorithm I wanted to know:

To measure the time I just used the following code:

Memory profiling turned out to be more difficult so I used Java VisualVM to monitor the memory usage. I used a little bit of code to generate a log with information to help me figure out what was going on. Some of the data I added to the log were:

Since garbage collection can be a time consuming task, I used the following VMconfiguration option: -verbose:gc. I used a 100 MB string to make more evident the impact in the memory while monitoring the VM. Now it was time to get to work! I took the answers in the thread with the most votes and started the tests.

The thread starts by asking the following question:

So I started with this algorithm as reference to compare against the answers in the thread:

The top answer (37 votes) suggested to use a buffered writer and append the StringBuffer/Builder to it:

Therefore the following code is equivalent:

It terms of time, it seems to be slightly better than the algorithm in the original question.

If you look at the charts and log you can see the memory usage starts to grow at 01:59:07, the memory usage peaks at 422 MB. We know that 100 MB are allocated for our StringBuilder; once it is converted into a String, another 100 MB are allocated for the String object and the last 200 MB are used getting the bytes from the original StringBuffer and writing the data to the file.

The second answer (13 votes), and preferred by the author of the question, suggested using the Apache Commons IO library.

Surprisingly, the charts reveal it is using 800MB—honestly, I was expecting something similar to the previous algorithm. An additional 700 MB to process 100 MB is not the most efficient in terms of memory, but that is the reason I wanted to run the test in the first place.

The third answer (also with 13 votes), stated that toString().getBytes() would require 2 or 3 times the size of the string and suggested the following: 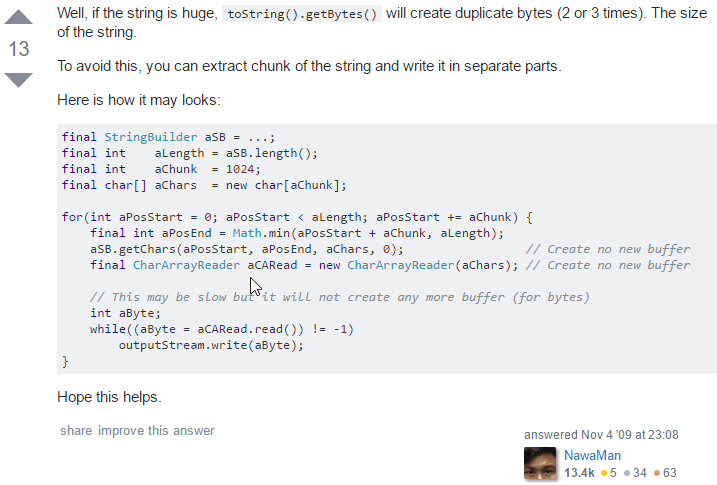 In terms of memory this is the most efficient so far with 245 MB maximum, but in terms of time it has the worst performance taking about 6 minutes to complete.

Note: The fourth answer (10 votes) is equivalent to the first answer so I skipped it.

This answer suggests to avoid the use of StringBuffer/Builder altogether and instead append data directly to the BufferedWritter.

That is a huge improvement in terms of memory usage, reaching a maximum of 5 MB. It turns out that not using StringBuilder/Buffer at all and appending data to the BufferedWriter directly is the most efficient way to dump a string concatenation. However, if you are working with an API you can’t change this is not something you can do.

At the end I wasn’t completely satisfied with any of the answers. I decided to write my own code based on what I learned. I used the third answer as my base and applied some knowledge gained while reading the Apache Commons IO documentation:

IO performance depends a lot from the buffering strategy. Usually, it’s quite fast to read packets with the size of 512 or 1024 bytes because these sizes match well with the packet sizes used on harddisks in file systems or file system caches. But as soon as you have to read only a few bytes and that many times performance drops significantly.

This is exactly what I needed to know to improve the performance and it was consistent with the results I got from the previous runs. My own answer ended up like this:

As you see in the logs, the data shows that my code was the most balanced in terms of memory consumption and run time. It takes a little more than one second to return from the method execution and about five seconds to complete all its work. In terms of memory, it reaches a maximum of 215 MB.

While Stack Overflow is a great resource, the top answer is not always the best answer. When searching for answers, use it as a tool, but do your own research to determine if the top answer is really the best answer. As far as the original question regarding dumping a Java StringBuilder to file, I hope you are able to use a BufferedWritter directly. If not, I hope the tests in the article help you choose the most appropriate option.

If you have any comments or questions, we would love to hear from you @MyEclipseIDE on twitter or via the MyEclipse forum. Good luck coding!

If you’re not already subscribing to our blogs, why not do it today? Subscribed