You are probably familiar with how difficult it is to get a visa to certain countries — it represents a long, tiring journey of document gathering and application process.  Upgrading Angular might actually feel like trying to move to another country!  Don’t you wish there were an all-inclusive visa, kind of like the Schengen one in Europe?  Such a solution does exist thanks to our Angular IDE.

TLDR; Get Angular IDE and upgrade to 4 simply. 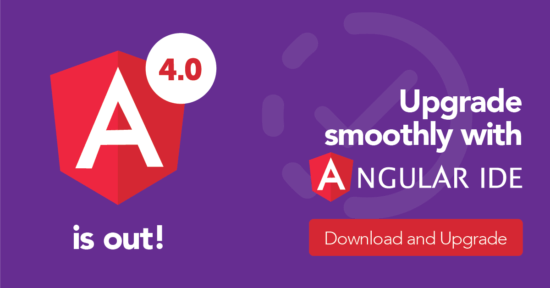 The regular process for Angular update is quite daunting indeed. Besides what seems to be an endless string of steps, you have to keep a few aspects in mind, among them your current Angular CLI version.  For instance, if you have beta.28 or less, you will need to uninstall your angular-cli package.  Then, to update to the new version, both global and the local packages have to be updated.  As far as the angular-cli.json is concerned, it is now .angular-cli.json, even though the old config file name will be recognized still.  However, some of its properties have changed: schema, polyfills, environments, linting, and generator defaults.  You must also bear in mind that now one tsconfig is used per app when working with the CLI projects, and that there is a new src/typings.d.ts file.  Karma configuration and protractor did not escape the update ordeal either, which represents a few more steps on your project migration path.

The most worrisome part is that you need to go through all of the above even if you had generated your project just two months ago.  Will you have to put up with all this migration headache six times in any given year?  Fortunately, there is an easy solution to this problem — a virtually automated update to Angular 4 with our Angular IDE (just click on one button and enjoy all of the benefits of the newest version in your existing projects). To give you a clearer picture of this transition “visa-free regime”, here are the steps that are done for you automatically:

As you can see, you are not left all alone in the harsh migration world — our Angular IDE is your Schengen visa to project migration.  If you want to focus on the really important and fun stuff (working on your projects) and not on all the red tape (updating), this IDE will come to your rescue.

Angular is also part of our Webclipse plug-in and our MyEclipse IDE.

Take a look for yourself just how easy it is to upgrade an Angular 2 project to Angular 4 with Angular IDE: