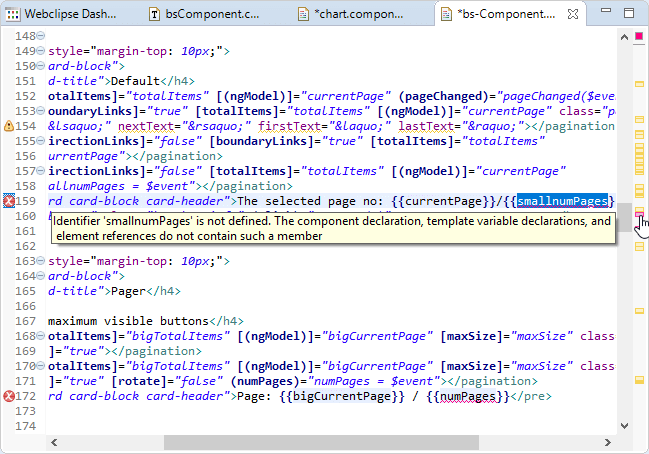 Support for Angular HTML templates is included in MyEclipse, CodeMix, and Angular IDE.

Angular HTML templates provide a structured way of binding data exposed by Angular components to the end-user. For instance, this example shows making a drop-down calendar with particular controls. Think of it like any other input form control in that it is going to render the UI and provide the backing logic.

In this example, the calData is defined on the current component and is passing the EVENTS data into the dd-calendar widget. There are multiple different constructs in Angular HTML templates, though the most common are for inputs and outputs:

In addition to providing information in and out of a component, the template allows for expressions inside the HTML blocks, such as:

In this example, the title and subtitle values would come from the Angular component. More interestingly however, these are bindings, so that updating the title inside the component will immediately cause the value to be updated in the UI.

There are multiple types of validation, though broken down into two main categories. Syntax and semantic validation as explained below. The validation is performed on both inline and external templates.

The core responsibility of syntax validation is to check the integrity of the template under development. Angular IDE will detect missing structural elements, such as a missing </div> tag, as well as validate that the custom <app-style elements have the expected input or output fields. Syntax validation even confirms that the directives provide the necessary custom tags for the extended constructs that Angular enables.

The responsibility of semantic validation is to interpret expressions and other complex structures in the HTML template file. Expressions are key to well-functioning templates and provide the ability for everything from for loops, to dynamic bindings.

The most common mistakes in developing Angular HTML templates include inconsistency between fields exposed and consumed, and typos in the expressions. Semantic validation helps rapidly detect these issues by validating the expressions and code constructs against the corresponding TypeScript classes.

The full list of code blocks validated semantically include:

In addition to template validation, the semantic validation will ensure the integrity of both inline and standalone HTML templates, as well as check consistency of the @Component declaration that use the templates.

This semantic validation of @Component declarations helps ensure that not only are the templates being developed are well defined, but setup for correct consumption at runtime by the corresponding TypeScript components.