Bob at Genuitec
Virtual evangelist at large. The face of Genuitec often appearing in graphics. Pen-name for our more shy writers of content.
Posted on Aug 14th 2017

This article will show you how to build a very simple monitor that allows you to observe some OS parameters, such as free memory available. We will be using Node.js, Angular 4, and Chart.js – and all you need is Angular IDE.

We will be creating two applications; the first is a Node application that will monitor the OS parameters and send them via websocket to the second app, which is an Angular 4 application. The Angular app will utilize Chart.js to represent the server status graphically.

To keep things simple, we will run our Node application on the same machine as the Angular application; typically, you would be executing this code on your server, a different physical, or virtual machine.
If you don’t already have Angular IDE, download and install it now. Create a new project using the Faceted Project wizard (File > New > Other > General > Faceted Project) and name it DuneServer. 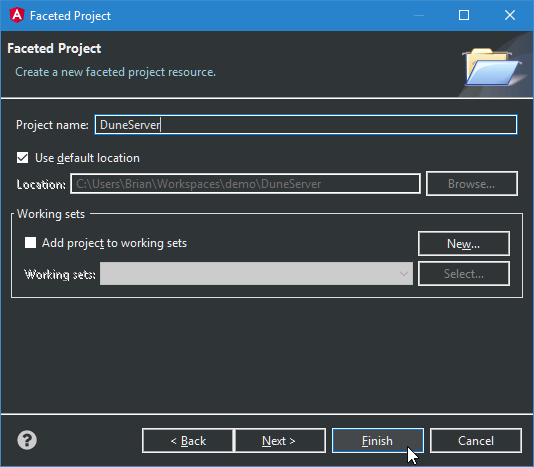 Create a package.json file in the root folder of the project with the following content

Our package.json contains 3 dependencies: os-monitor – a very simple monitor for the built-in os module in Node.js, nodemon – monitor for any changes in your Node.js application and automatically restart the server (perfect for development), and socket.io – enables real-time bidirectional event-based communication.

This will download and install all the dependencies of the project as Node modules.

Let’s also create the main code for our application, create a new file named index.js in the root of the project, and place the following code in it.

In the code above we imported socket.io and created a server running on port 9500, next we imported os-monitor. The socket.io server will emit a connect event when a client app connects with it, so on connect we send the os type (osm.os.type) and number of cpus (osm.os.cpus()) to the client.

In the last two sections of the code above, we start monitoring the server using osm.start(), at an interval of 300ms. os-monitor emits a monitor event on each monitor cycle, so on monitor we use socket.io to send the monitorEvent to the client.

When the dependencies from the previous step have finished downloading, open the Terminal+ view again and type the following command to run our server app.
npm run dev

Note: If you see an EADDRINUSE error show up in the Terminal when executing the above command, the port 9500 may already be in use on your system. Change it to another port, but do remember to change the references to this port in the Angular app below as well. 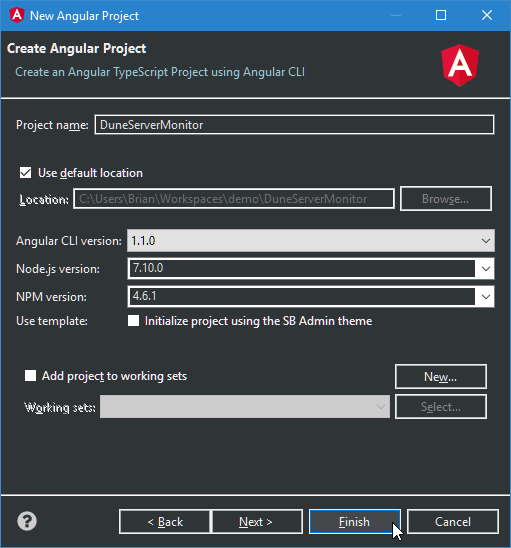 Finally, for styling, let’s add some boostrap CSS to our index.html file. Add the following snippet of code into the head section of the src/index.html file.
Our client app looks like the image below, so we’ll now go on to discuss the sections of the code.

We used the Component decorator to mark our class as an Angular component and provide additional metadata that determines how the component should behave. The app component (app.component.ts) uses the content of app.component.html as its template and applies the style rules in app.component.css.

Our app class implements OnInit interface which we imported from ‘@angular/core’, so we can use the ngOnInit life cycle hook called by Angular to indicate that Angular is done creating the component. Finally, we created some class variables to be used in the succeeding sections.

Here we created a doughnut chart to be used to display the free memory.

Here we created a line chart to be used to display the 15 minute cpu load average.

Here we are setting callbacks for the connected and os-update events emitted by our socket.io server.

Here we empty the the array that holds the labels for the free memory chart whose initial value is [Free,Used], then we push two new labels of the format Free:XXMB and Used:XXMB.

Here we empty the dataset for the doughnut chart and push new values, then we update the chart.

Note: The loadavg array is available only on Linux and macOS. On Windows, the array will always be [0,0,0], resulting in a flat graph.
Finally let us run the Angular app, there is a server view in Angular IDE, in order to open it, select Window then Show view then Servers, right click on DuneServerMonitor and click Start Server. 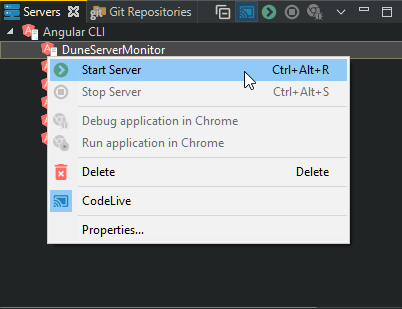 Use the Run or Debug context menu actions to automatically open the app in Chrome, or manually open  http://127.0.0.1:4200 in your browser to see the app in action. Note that the Angular application is served at port 4200 by the ng serve command, executed by the Start Server action – which is why we use this port to access the app. This application itself still connects with the Node server we set up earlier at port 9500.

Our final real-time server monitoring dashboard looks like this: