Note: Matisse4MyEclipse features are deprecated begining with MyEclipse 10.0. For Swing functions, it is recommended you use SWT/Swing Designer, which is compatible with your existing work files.

MyEclipse Visual Swing Designer is an implementation of NetBeans Matisse that integrates its functionality into MyEclipse to enable the rapid development of Java Swing rich client applications (RCP) within the MyEclipse environment. Developed in partnership with Sun’s NetBeans project, MyEclipse Visual Swing Designer offers full control and round trip development between RAD visual design tools and underlying Java source code. It consists of a form designer with a source mode, an extensible palette of Swing and AWT controls with drag-and-drop placement support, advanced alignment guides and sizing tools, as well as property and outline views.


The design process involves drag-and-drop placement of Swing and AWT components from the UI controls palette onto a visual form. The Form editor provides advanced alignment guides and sizing tools to enable quick development of aesthetically pleasing user interfaces in minutes. The source mode of the Form editor is an embedded version of the Eclipse Java editor and allows quick viewing and modification of generated and supporting Java code.

Key facts to be familiar with as you work with Matisse4MyEclipse are:

The Swing/Matisse perspective presents an  organization of the primary Matisse views and the Form editor in  a workbench layout very similar to the NetBeans 5.0 user-interface organization. The intent of this perspective is  to quickly introduce new Matisse4MyEclipse users to the  primary Matisse views and editors and to  provide NetBeans users with a familiar layout.

The workbench displays the Swing/Matisse perspective’s predefined views, toolbar, and menu actions. You can customize the perspective by adding/removing views and action sets, and repositioning and resizing any view.

Working with Matisse4MyEclipse begins with creating a new Matisse Form as part of your project.

MyEclipse supports many different kinds of Swing-based forms that you can add to your project, including:

When you create the new form, MyEclipse prompts you to open the Swing/Matisse perspective where can design your form in the visual editor. The focus of the Matisse4MyEclipse tools is to help you work quickly and efficiently by providing tools that allow you to visually edit your forms while also allowing you to dig deep into the code and tweak behaviors you want to customize. 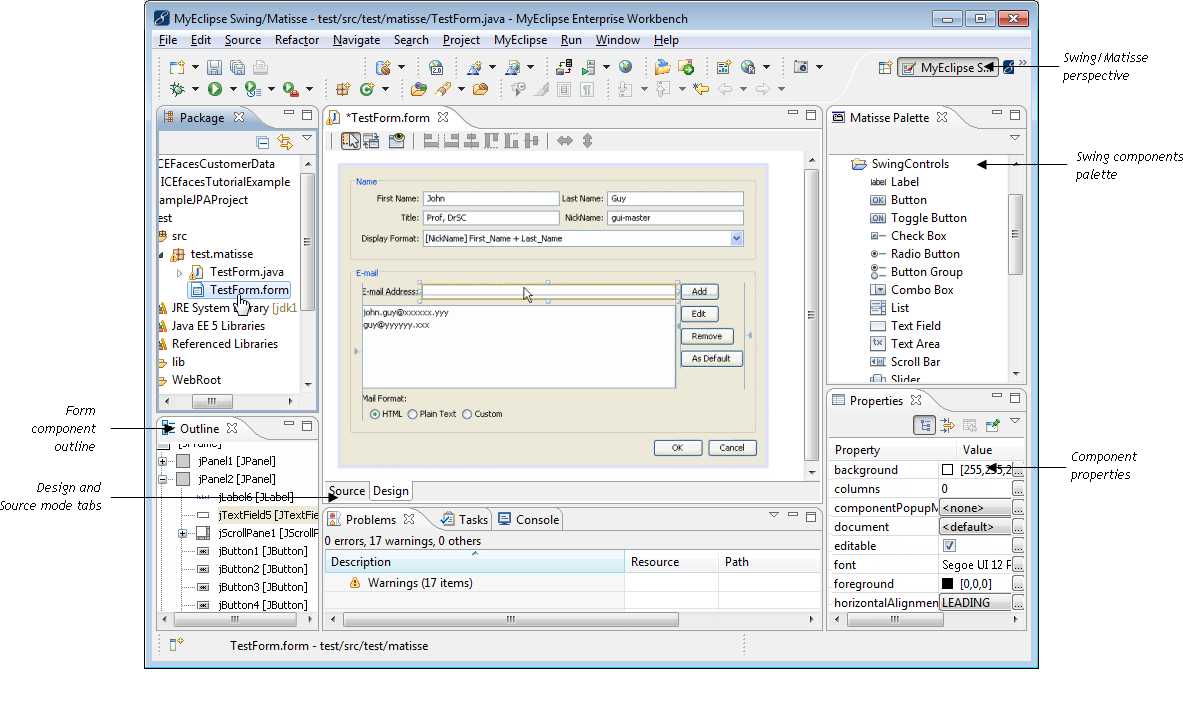 Some of the tools available for designing your forms are:

Form Designer – At the center of the screen, you have the visual representation of the form you are designing, and the components on that form can be dragged and dropped or organized in any fashion you want.

Dragging components onto the form

Form Outline – This displays the hierarchy of the visual components in your form (for example, which panels contain which components, etc.)

Matisse Palette – This palette includes the components for designing your form. It can also contain custom components.

Properties – This displays the properties, events, and code generation settings for each component in your form for you to tweak or fine-tune as you want.

Properties viewSource/Design – The tabs at the bottom of the Form Designer allow you to easily switch between the Source and Design views of your form, allowing you to work in the view you prefer.

Quick Preview – This preview mode pops up an emulated version of your running form for you so you can get an idea of how it will look at runtime without needing to run the entire application.

Viewing the form with the quick preview

Matisse4MyEclipse also supports the use of Custom Swing Components in the Matisse palette. You can add new components by opening the palette’s management tools.

Select the type of component you’d like to add.

Selecting the type of component

Now, you have access to your custom components from the Matisse palette. They can be dropped into any form you are working on or you can edit properties using the advanced form design tools.

Using a custom form added to the palette

This section highlights some of the most notable differences between Matisse4MyEclipse and the NetBeans 5.0 Swing Designer. To remain consistent with other MyEclipse visual design tools, Matisse4MyEclipse uses a slightly different interaction model than NetBeans for adding a UI control from the Matisse palette to a form.