For quick deployment and testing, MyEclipse includes a special installation of Tomcat 7 and a MyEclipse Derby database as part of the integrated sandbox.

Note: Connectors are able to launch and interact only with  servers installed on a locally accessible file system. WebSphere server connectors are available in MyEclipse with WebSphere support

You can configure as many supported server instances as you want; however a  typical environment requires only a small set of connectors  to be enabled. You can configure multiple server  instances if you need to test with various configurations.

Connectors are configured using the New Server wizard accessed from the Servers view or from the Run on Server window. The configuration process  is straight forward, but you must be familiar with the  installation and startup details of your server.

Note: A common mistake made during the configuration process is to specify a Java JRE instead of a full JDK as the JVM in which the server will be launched. The issue is that a Java EE application server requires access to a JDK compiler to support dynamically processing of JSPs and EJB proxies. The JDK includes the required compiler; the JRE does not. 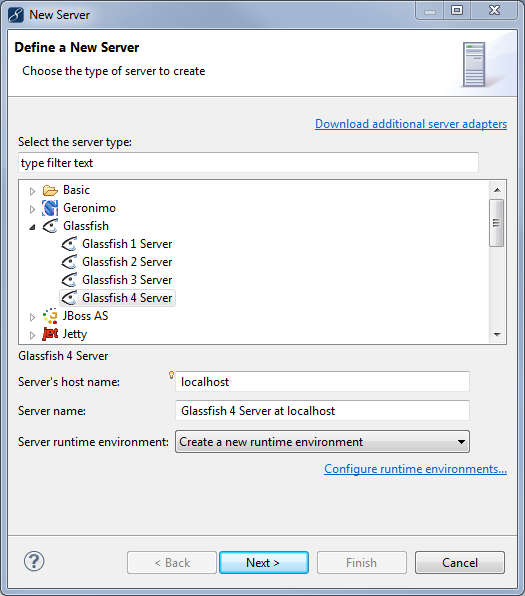 The requirements for MyEclipse application server support  are:

If you have an application server that is not controlled within MyEclipse (i.e. you start and stop the server using external tooling or the server’s own shortcuts), you can deploy and hot sync resources to it using the Custom Deployment Server configuration.

On the Define a New Server window, expand Basic, and select Custom Deployment Server. You set up the connector like any other, but in addition, you specify the deployment location for your MyEclipse resources. 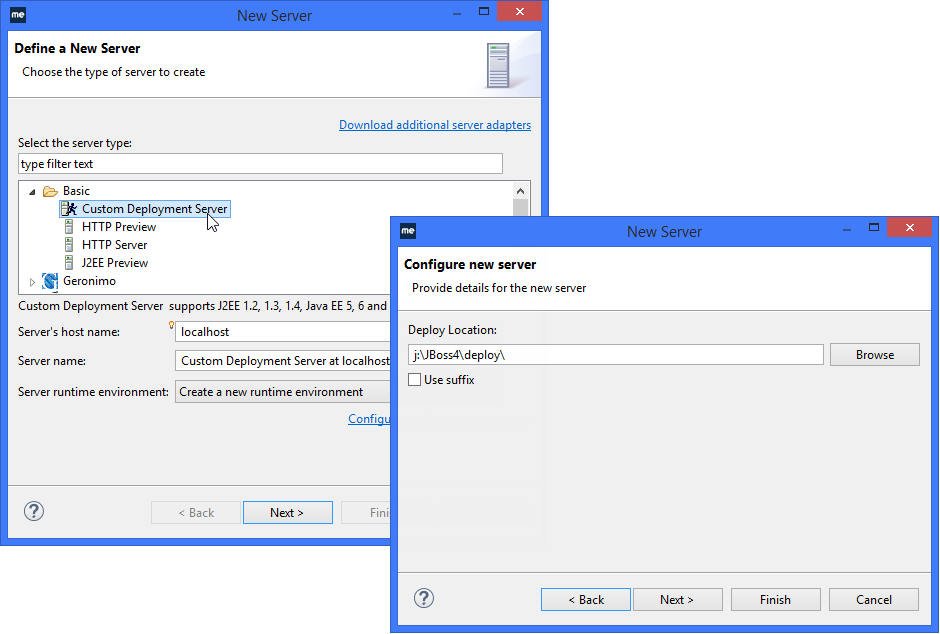 The Servers view provides a comprehensive view of the state of configured application server connectors. This view is a standard part of the MyEclipse default perspective. To open the Servers view, select Window>Show View>Servers.

Note: If you have a perspective open that causes the Servers view to be absent from the menu, select Other, expand MyEclipse Java Enterprise, and select Servers.

The Servers view toolbar and the right-click context menu contain server controls. The table below provides a description of the function of each tool.

The Servers view indicates when a server is out of sync. The states and statuses indicate whether the server is stopped or running and whether or not projects are in sync, respectively. You can sync up apps on the server with the server running or stopped: 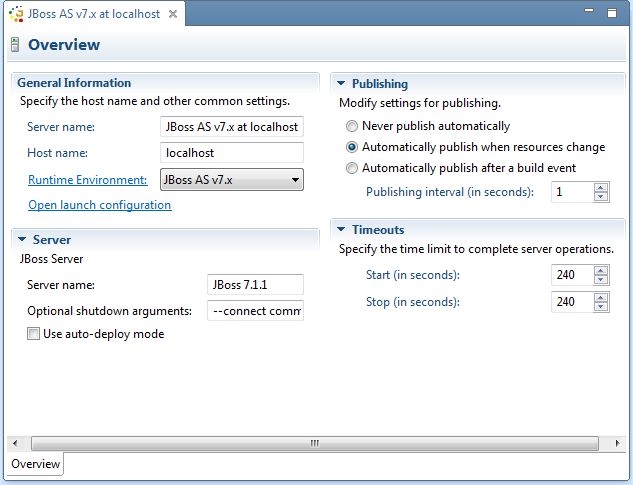 The default publishing setting is to automatically publish when resources change. This is also called hot-sync’ing. The publishing interval indicates the amount of time the server waits after resources change or a build event occurs. Timeouts indicate the maximum time allowed for completion of server operations.

It’s possible to store Tomcat configuration data in your workspace, so multiple developers using the same server can each configure Tomcat differently. To do this, remove all Tomcat deployments in the workspace, and then Publish by right-clicking Tomcat in the Servers view and selecting Publish.

Note: The Configuration folder field was added in MyEclipse 2015 CI 13. 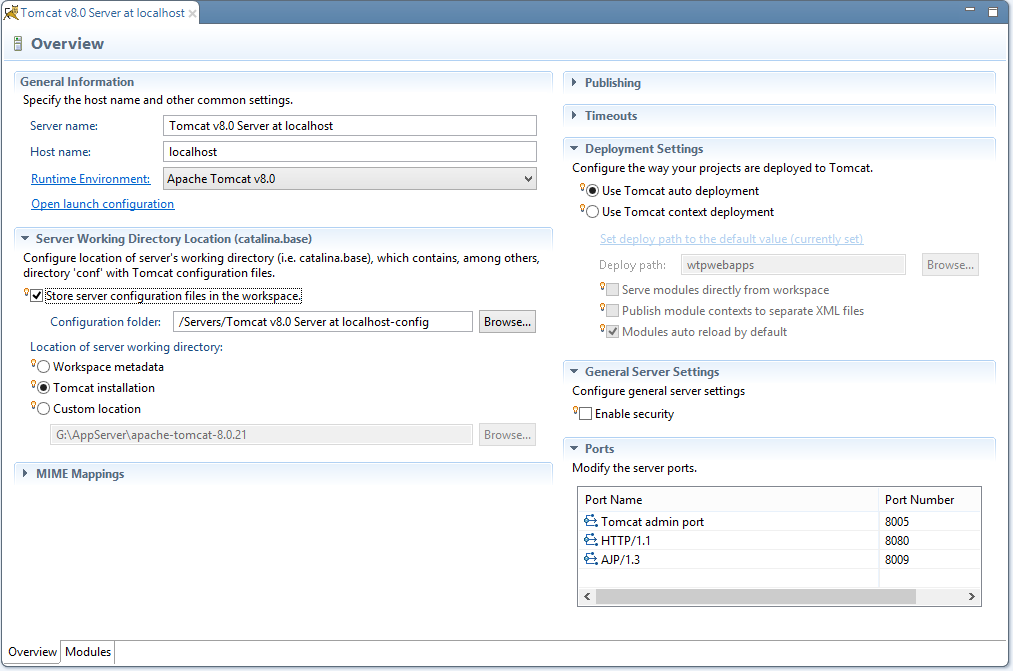 For a project, you can specify the server on which you always want the project to run, preventing you from having to select the server each time you select Run As>MyEclipse Server Application. You can also set a project’s default deployment mode.

To specify a project’s server, right-click the project, and select Properties. Expand MyEclipse, and select Server Deployment. Specify the server and the deployment mode, when applicable, to always use when running the project. 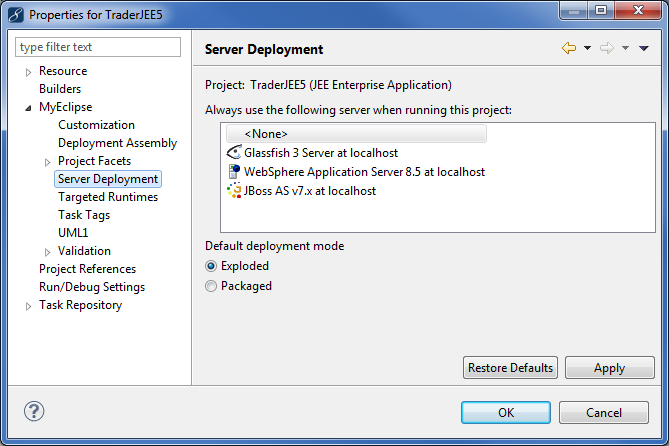 Flexible deployment support allows you to deploy only a subset of your source folders, deploy to paths that don’t exist within your workspace project, and generally deviate from a fixed project structure where everything had to reside under your project’s WebRoot folder. For enterprise projects, you can also control archive names and utility project deployment. 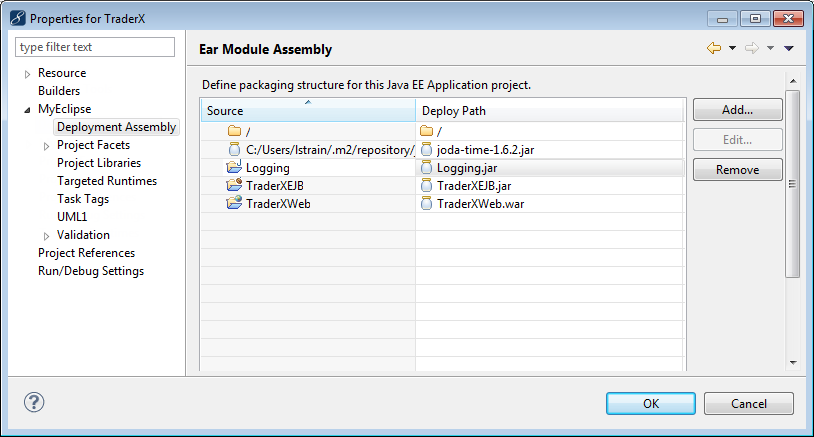 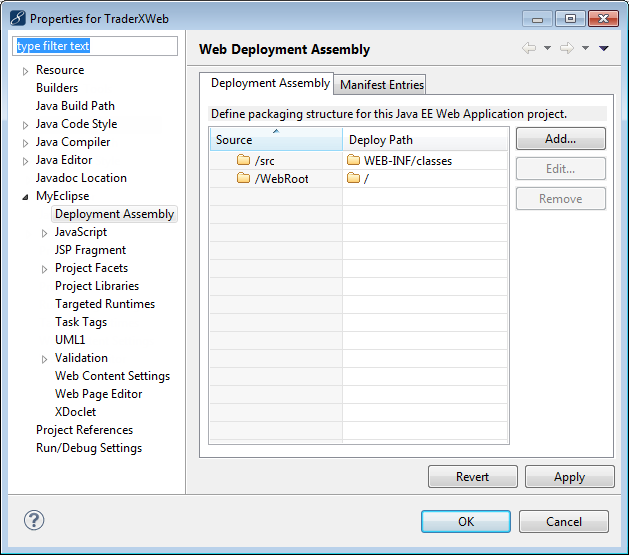 Deployment assembly for a Web project

5.2 Deploying to a Server 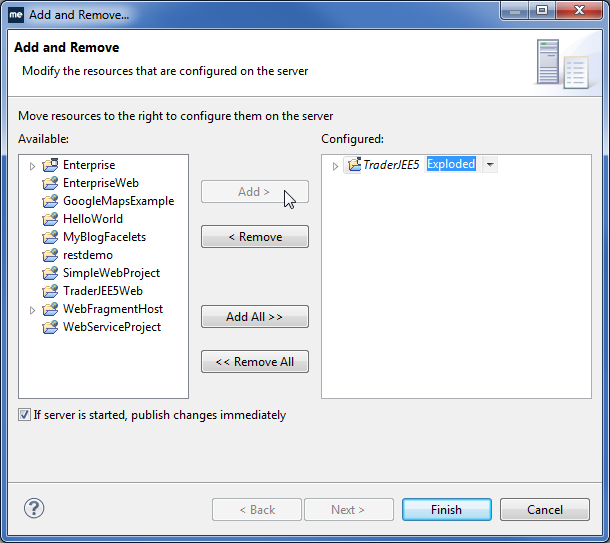 Adding projects to the server

icon indicates an exploded web module, and the

After a project is added to a server, it appears in the Servers view below the server name.